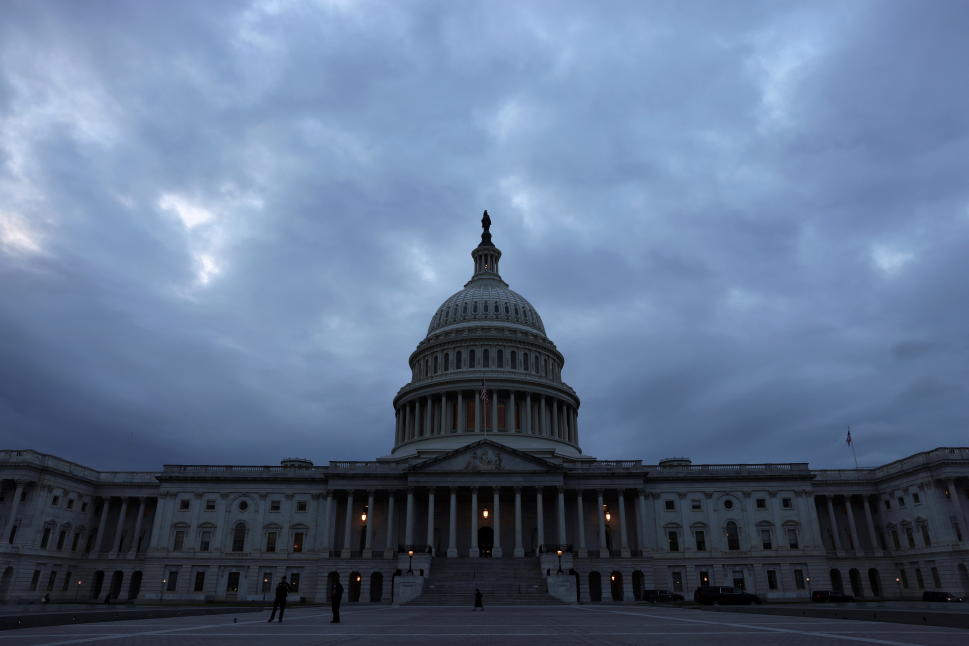 The Omicron variant and inflation worries are spooking markets. And as if investors aren’t preoccupied by enough, the nation’s leaders are bickering over debt and spending — well, and just about everything else, to be honest — in ways that could lead the government to shut down.

On Friday, most eyes will be focused on a November jobs report that’s likely to portray a strong labor market, the byproduct of a resilient economy defying the gloomiest predictions. Yet Washington’s warring factions, having struck an agreement late Thursday to keep the government funded until February, will also be engaged in a Sisyphean effort to prevent the U.S. from defaulting on its debt (yes, that delightful old chestnut is roasting once more, and just in time for Christmas).

Although Congress reached an agreement to keep Uncle Sam’s house open temporarily, there’s still the matter of the debt ceiling. Treasury Secretary Janet Yellen has flagged December 15 as the date the statutory limit will be breached, putting the world’s largest economy in technical default.

As the Morning Brief has reported previously, partisan sparring over the debt is tedious and torturous, but the consequences of a theoretical default are quite severe. Even an 11th hour deal may not spare the U.S. from having to swallow the bitter pill of accountability — as it was forced to do back in 2011, when S&P stripped the nation of its AAA credit rating.

A debt showdown, or another downgrade, couldn’t come at a worse time. Until Omicron’s appearance, bond investors were driving up interest rates (also known as the nation’s borrowing costs) based on surging inflation.

While Yahoo Finance’s Brian Cheung reported on Thursday that Federal Reserve officials appear to have found religion on the question of skyrocketing prices, a showdown over the debt and spending could unsettle markets by upending stocks, overwhelming the safe-haven buying that sent yields into reverse, and cutting into growth.

The government is now funded through mid-February, but Washington has once again kicked the can down the road. According to S&P Global Markets, an eventual shutdown could shave 0.11 percentage points from growth every week the government is closed. That translates into a weekly rate of $1.8 billion annualized.

“Turning the government off and on comes with a cost,” Beth Ann Bovino, chief U.S. economist at S&P Global, wrote in an analysis published on Thursday.

“Indeed, even the January ‘weekender’ shutdown during former President Donald Trump’s administration wasn’t without costs,” she added. “The most recent 35-day shutdown from fourth-quarter 2018 through first-quarter 2019 was so severe that it cut GDP by 0.1% and 0.2%, respectively,” Congressional Budget Office data found.

A shutdown could add to inflationary pressures, and create “another headache” for the Fed, Bovino added. And it gets worse: the specter of a U.S. default still lingers in the background — something S&P warned could be “substantially worse than the collapse of Lehman Brothers in 2008,” and could devastate markets and the global economy.

The Committee for a Responsible Federal Budget (CRFB) noted this is the 25th consecutive year that Congress hasn’t passed appropriations bills in a timely way, and also warned that the fallout from a default would be grave, even as more deficit spending will add to the toxic mix of high debt and inflation.

“Ideally, both parties would take responsibility for raising the debt ceiling. And ideally, they would do so while also passing measures to help control the debt, as has been done many times in the past,” according to Maya MacGuineas, CRFB’s president.

“Regardless, we cannot afford to play chicken with the full faith and credit of the U.S. government — we must raise the debt ceiling immediately, and it is reckless that we have not already done so,” she added.

By Javier E. David, editor at Yahoo Finance. Follow him at @Teflongeek

Biden gets a break on oil and gas prices