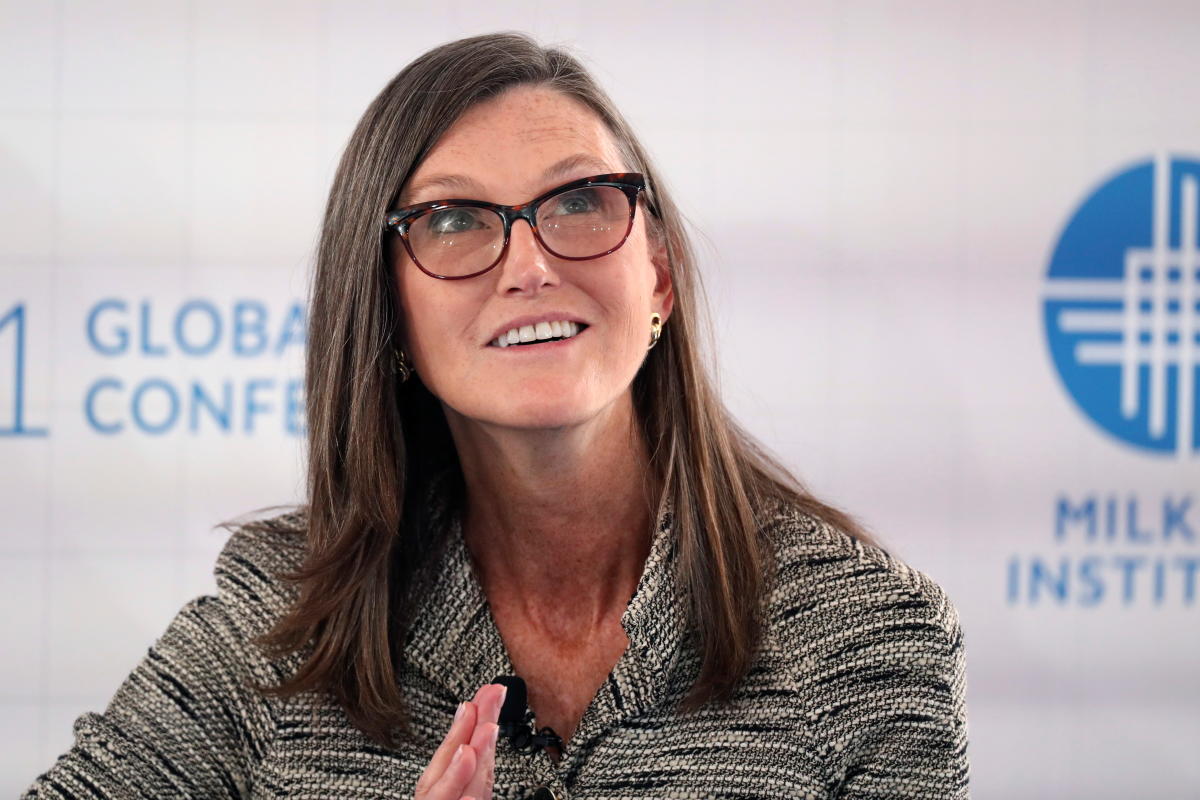 Like many of us, Cathie Wood has had a crazy 2021. Investors in her flagship fund might argue that the year was even crazier.

Ark Innovation (ARKK), Wood’s main ETF, is poised to end 2021 down by nearly 25%, even as the S&P 500 is up by about the same amount. But the Ark Invest CEO is staying the course with bold bets on high-flying tech companies and chiding critics who commit to benchmarks “unlikely to generate even average returns during the next 10 years” — even as her own investors reel from heavy losses.

Despite a year marked by underperformance, Wood is keeping pace with the disruptive innovation strategy that positioned her as a bull market poster child last year after her allocations to the so-called “stay-at-home” picks that benefited from COVID-19 lockdowns earned her an annual return of 150%. Even as those stocks fall out of favor, Wood, whose firm declined a request for an interview, is sticking to her plan, arguing that naysayers should instead be worried about “safe” indexes like the S&P 500 with values she says have soared above those of the underlying companies they track.

“Because the global economy is undergoing the largest technological transformation in history, most benchmarks could be in harm’s way,” wrote Wood in recent market commentary on her blog. “We will not let benchmarks and tracking errors hold our strategies hostage to the existing world order.”

For now, it’s ARKK that seems to be in harm’s way. Wood promised her strategy could deliver a 40% compound annual rate of return during the next five years — a projection she later tweaked to a lower, however still-lofty 30%-40% after criticism of her statement. ARKK is down 11.22% this month as of Dec. 29 and more than 20% year-to-date — with the high-valued but often unprofitable technology stocks that comprise much of the fund’s holdings souring among investors growing increasingly wary of the assets that were buoyed by the pandemic as it appears to creep toward an end.

Wood, a star on Wall Street whose prescient stock picks earned her the praise, warned that the “tried and true” investment strategies that have worked in the past are likely to disappoint investors in the long-term. She argued that investors who allocate to low-risk, more predictable stocks will be thwarted by names in five inventive sectors she’s set her sights on — DNA sequencing, robotics, energy storage, artificial intelligence, and blockchain technology.

“Unlike many innovation-related stocks, equity benchmarks are selling at record high prices and near record high valuations, 26x for the S&P 500 and 127x for the Nasdaq on a trailing 12-month basis,” she said, defending her high-risk, high-reward strategy.

She added that the five major innovation platforms she banks on are likely to transform the existing world order that the benchmarks represent.

“There’s some truth to that. There are two sides to every story,” said AlphaCore Wealth Advisory CEO Dick Pfister, adding that the S&P is held up by the heavily weighted mega-cap companies like Amazon, Apple and Microsoft that have led its gains, while ARKK — despite holdings of big stocks like Tesla, which also joined the mega-cap tech club this year — doesn’t have the mega, mega names.

“If the mega-cap stocks come back down to earth, depending on the time horizon, Ark could actually rally out of the S&P 500,” said Pfister.

Wood points to Zoom (ZM), Teladoc Health (TDOC), and DocuSign (DOCU), three of her picks whose prices have plunged 43%, 53% and 29%, respectively, this past year, as examples of stocks that will soon outperform. The companies continue to gain in fundamental measures like quarterly revenue and EBITDA, earnings before interest, taxes, depreciation and amortization, which serves as a measure of company profitability.

Zoom, for instance, saw its revenue rise 58% and EBITDA increase 53%, since its fiscal quarter ended July 2020, she notes, even while losing popularity among investors who’ve shrugged it off as a “stay-at-home stock” likely to falter once the pandemic ends.

Wood, however, dismisses that notion, claiming that “stay at home” has evolved into “‘stay connected’ in a hybrid work world and ‘stay competitive,’” calling the shift a replacement cycle comparable to the emergence of the internet 30 years ago.

“Instead of surfacing and researching exciting investment opportunities in the burgeoning innovation space, investors seem to be hugging their benchmarks and looking to the past for future success,” she said. “Benchmarks guide investors to companies that already have enjoyed considerable success.”

Her conviction comes while ARKK’s top 10 holdings end the year mostly in the red, with all but two companies — Tesla (TSLA) and Intellia Therapeutics (NTLA) — down in 2021. Of these 10 allocations, seven saw declines of at least 20%.

“After correcting for nearly 11 months, innovation [ARKK] stocks seem to have entered deep value territory, their valuations a fraction of peak levels,” she said.

“If there was ever a buying opportunity for future stocks, I would say it’s now, because you’re not going to see these types of companies that are long-term disruptors and innovators at these prices,” said Lydon.

A bigger asset base

But the success of Wood’s vision depends on who you ask. While some may laud her active, shoot-for-the-stars approach, others are more wary of her ability to assess risk.

Robby Greengold, a strategist for Morningstar’s U.S. equity strategies team, told Yahoo Finance earlier this year that while rivals are “benchmark aware” and have “portfolio construction parameters,” ARKK “doesn’t have very much of that.”

“They were able to navigate the coronavirus sell-off and come out fairly well — 2020 was an incredible year from a performance standpoint,” he said. “But things are different now.”

Greengold said the fund is not accustomed to managing the bigger asset base — about $18 billion as of Nov. 30 — it is now dealing with. Its size now could make pulling off the level of returns previously attained when it managed less money more difficult to achieve.

Wood has doubled down on her stance that she can do just that, shrugging off losses and dismissing fears of a “bubble,” even as it stands to be tested by the sell-off of high-growth tech stocks likely to be worsened next year if the Federal Reserve acts on expectations to raise interest rates as many as three times, making such companies particularly vulnerable.

“In our view, these Pavlovian responses will prove just as wrong as those in the early days of the coronavirus crisis,” said Wood. “They are backward-looking and do not recognize that companies investing aggressively today are sacrificing short-term profitability for an important reason: to capitalize on an innovation age the likes of which the world has never witnessed.”

“Unlike companies paralyzed by short-term oriented shareholders demanding their profits and dividends ‘now,’ truly innovative companies are on the offense,” she added.