Pictures of Jimin cover the walls inside Cha Tea in celebration of the BTS singer’s 26th birthday. (Photo by Brooke Tyburski/Special for Cronkite News)

MESA – Cynthia Vanhkham and Ally Fernandez sit at a small corner table in a boba tea shop, handing out tiny pictures and decorated cup sleeves to an eager crowd. Cha Tea usually is quiet; drowsy, even. But on this Saturday afternoon, it’s filled to the brim.

Hundreds of people – from high school students to middle-aged mothers of all races and backgrounds – had gathered to celebrate the coming birthday of Jimin, one of the boys of the powerhouse K-pop group BTS.

Cha Tea, tucked in a strip mall on West Main Street, is ready to party. Pictures of Jimin are plastered across nearly every square inch of its walls. Small tables pack the tight space, each hosting a small business selling coffee mugs, tote bags, T-shirts, jewelry and other merchandise adorned with the faces, phrases and symbols of Jimin and other Korean-pop idols.

The music, drinks and trinkets all are part of a strategy to connect with ARMY, the name of BTS’s millions-strong fanbase. And the strategy seems to be working. A long, snaking line of fans outside Cha Tea could be seen from practically anywhere in the strip mall.

Popular music has long been a revenue generator for businesses, particularly since the 1950s, when rock and roll and a focus on young listeners converged. Merch from the Beatles, Spice Girls and Britney Spears filled the shelves of retail stores around the world at the peaks of their popularity, bringing in customers and driving sales. 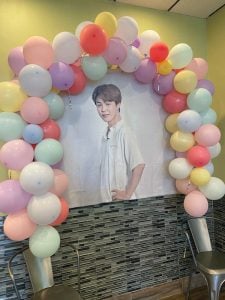 Cha Tea in Mesa celebrated the 26th birthday of Jimin, one of the boys of the powerhouse K-pop group BTS. (Photo by Brooke Tyburski/Special for Cronkite News)

K-pop gives businesses another opportunity to capitalize on a genre’s popularity. One big difference is that these are Asian artists, often singing in their native languages, who appeal to a mostly English-speaking audience in the United States.

As a genre, K-pop has been around since the 1990s in South Korea, with brief flashes of exposure in the U.S. Still, no K-pop group found lasting success in the U.S. market until BTS released their breakthrough album “The Most Beautiful Moment in Life” in 2015.

In 2020, BTS sold 674,000 copies of their album “Map of the Soul: 7” in the United States, joining Taylor Swift as the only two artists to sell half a million albums that year, according to Nielsen Music.

In 2019, the group also sold out every one of their U.S. shows, each held in football stadiums, including the Rose Bowl in Pasadena, California. Even during the COVID-19 pandemic, their Muster Sowoozoo online concert last June brought in more than $70 million in merchandise and ticket sales, drawing in more than 1.3 million paying viewers, according to Big Hit Entertainment.

“They’ve spoken to the United Nations three times,” said CedarBough Saeji, a professor of East Asian studies at Indiana University who’s known as the “K-pop professor.” They’re “showing up on billboards in Indonesia and India and any other country that starts with an ‘I.’ You can’t tell me the world doesn’t know who they are.

BTS is estimated to bring in about $5 billion to South Korea annually and draw 800,000 tourists to the country each year, according to NPR and Hyundai Research Institute.

“BTS’s power is partially that they are seen as somebody who could sell anything,” Saeji said. “They’re able to really galvanize interest and move product in a very effective way.”

Many businesses, small and big, have sought to cash in on it.

In May 2021, McDonald’s sold 1.2 million BTS-inspired chicken nugget meals, resulting in an increase of 40.5% in sales over the same period the previous year, according to the fast food giant. 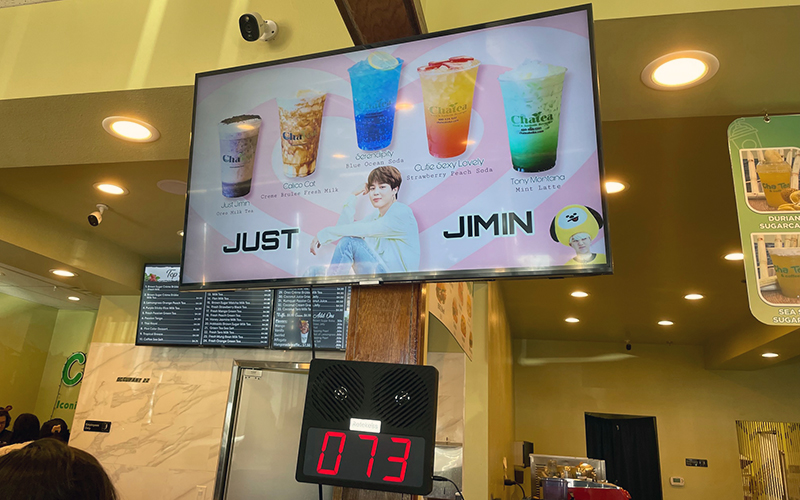 Small businesses also have used the band’s popularity to their advantage, but none more than boba tea shops, a popular hangout for young people in the U.S. Many shops partner with fan groups to host cup-sleeve events, which started in South Korea to celebrate special dates for a K-pop idol or group, such as birthdays or anniversaries. The fan group takes care of decorations, the sleeves and inviting people and vendors.

“Finding a location usually isn’t that hard because the shops are usually pretty accepting of it because we bring in customers,” said Vanhkham, one of two members of AZyouniverse, the fan group that organized the event at Cha Tea in October.

“When customers come in and they buy a drink at the shop, they get a cup sleeve and usually some other freebies like photo cards or key chains.”

AZyouniverse began in 2019 as a way for Vanhkham and Fernandez, 23-year-old friends and BTS fans, to connect ARMYs in Arizona. They held the first event at a roller-skating rink in Glendale.

Since then, Vanhkham, a nurse, and Fernandez, an architecture graduate student, have organized six events at boba shops in the Phoenix and Tucson areas.

The events can be costly and time-consuming for them. The friends spend about $300 to print commemorative designs on cup sleeves and buy decorations and freebies, and they typically dedicate long hours to setting up for the events when the stores aren’t open. Altogether, it can take them two months to prepare for a single event.

Cha Tea is one of their favorite locations because the shop covers most of the events’ costs, Vanhkham said, unlike most other places, where she and Fernandez are responsible for the costs.

“But we do ask for donations from fans as well,” she added. They also have sold pins and other handcrafted merchandise on Etsy.

She paused, laughed awkwardly, glanced at Fernandez and spoke slowly, as if sharing a secret: “I don’t want to speak badly about anybody, but there are times where we worked with a place and they just are doing it for the customers. The money.”

“But we completely forget about how overwhelming the entire event day was as we were able to help the business grow,” Pham said.

Brian Chong has built a successful business on the phenomenon of K-pop while honoring his Korean roots. He immigrated to the United States in 1976, determined to start a business to share his culture. It took him 12 years to open a traditional Korean barbecue restaurant in the Koreatown section of Carrollton, Texas.

The problem was, few non-Koreans were coming in to explore Korean cuisine.

But in 2008, Chong added elements of K-pop into his restaurant to make the experience more than just about eating bulgogi. This was long before most Americans had even heard of K-pop. 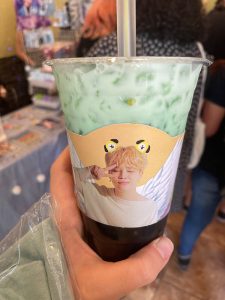 “I started showing K-pop videos on the screens because we had like 15 TVs and screens,” Chong recalled. “I wanted to show non-Koreans what K-pop and Korean culture are, and they seemed to really enjoy our culture.”

His idea took off, bringing many new diners to his restaurant. Soon, Chong was opening boba tea shops in and outside Texas. The most recent, Dragon Boba in Los Angeles, opened in January 2020.

The shop’s Instagram page is a plethora of K-pop: patrons posing with lifesize cardboard cutouts of the BTS boys, macaron pastries decorated to look like BTS-related characters, and rainbows of drinks adorned with colorful BTS cup sleeves.

Cup-sleeve events at Dragon Boba are more than just the typical pay-and-go type of events. They’re large-scale occasions that stretch into the parking lot and include DJs, dance performances and games.

Michelle Ochoa of Flower Vantae, a fan group that organizes many events at Dragon Boba, said a typical event brings in about 5,000 fans and costs her about $1,000 just for cup sleeves.

Vanhkham and Fernandez said they enjoy what they do, but the popularity and money generated by cup-sleeve events aren’t necessarily a good thing.

More businesses are requesting that AZyouniverse plan events at their store, putting pressure on the friends and prompting them to question the businesses’ intentions.

“Part of the fun is having them less frequently so we have the time to properly plan them out and make them into something special,” Fernandez said. That’s also what motivates us to keep doing them. We love planning out and designing everything and then seeing people’s reactions to our designs in person.”

They don’t want the fun events they started planning as two BTS fans to bring people with a shared love for BTS together to turn into a chore. And they especially don’t want to be used by stores just to bring in customers.

Delivery Carriers Are Creating a Killing on Meals Help

4 days ago naffa urbach
We use cookies on our website to give you the most relevant experience by remembering your preferences and repeat visits. By clicking “Accept All”, you consent to the use of ALL the cookies. However, you may visit "Cookie Settings" to provide a controlled consent.
Cookie SettingsAccept All
Manage consent