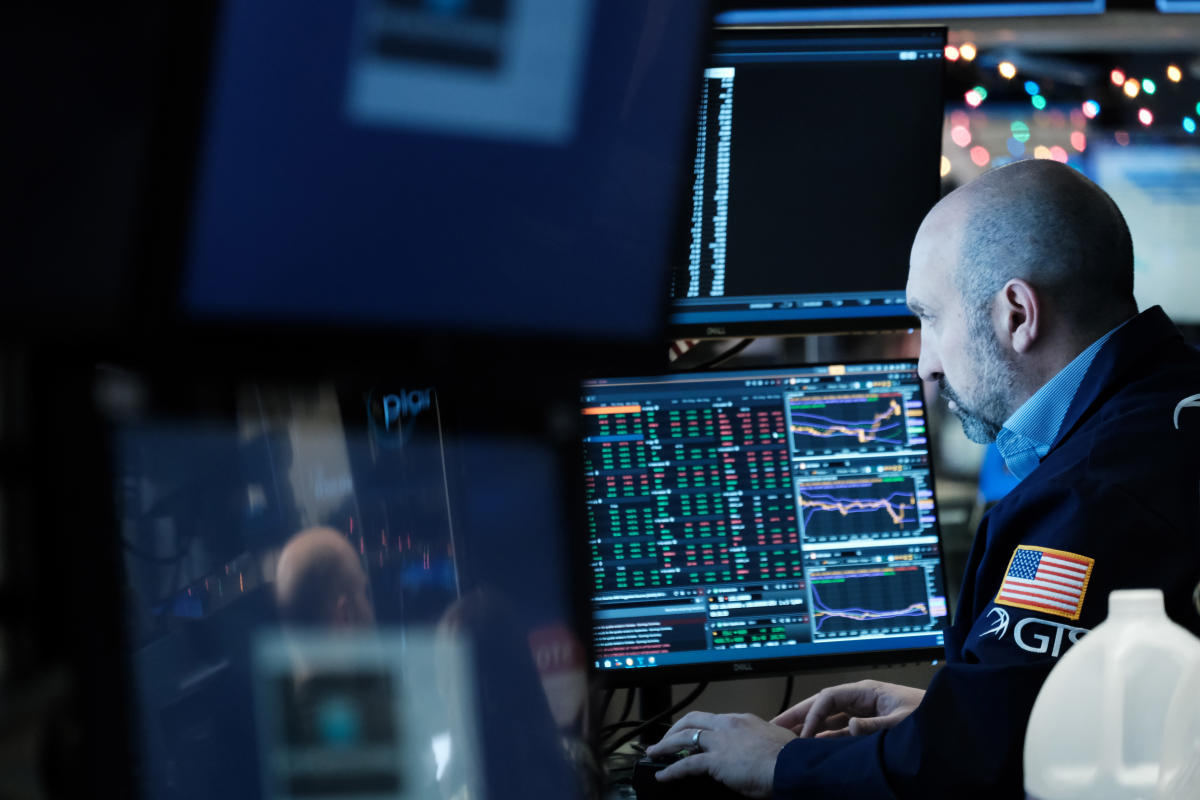 U.S. stocks lost steam in a lackluster trading session on Friday, as major indexes closed the last day of 2021 marginally lower, but still within striking distance of record highs made during a banner year.

The S&P 500 treaded water during the session but closed out 2021 up 27%, marking its third year of double-digit gains. The Dow and Nasdaq wavered, but all indices were close to record highs.

Next year is poised to be another strong year in equities, though strategists anticipate the S&P 500 is unlikely to match the gains it saw in 2021.

The markets will have to weather rising inflation, determine the Federal Reserve’s pace on raising interest rates, and mull President Joe Biden’s second year in office as new COVID-19 cases swamp the U.S. That period is known as the “sophomore slump,” since the second year of a president’s term historically tends to be as much as 40% more volatile than the other three years, according to CFRA research chief investment strategist Sam Stovall.

“I think that 2022 is going to be a good year that tends to follow a great year,” Stovall told Yahoo Finance Live. “We certainly have a high wall of worry that we’re going to have to scale.”

U.S. equity markets were open on New Year’s Eve for the first time in a decade, thanks to NYSE Rule 7.2. It states that trading is closed either Friday or Monday if a holiday falls on a weekend, with the exception of “unusual business conditions, such as the end of a monthly or yearly accounting period.”

Markets mostly charged higher this week, even as reports of rising COVID-19 cases pour in across the globe. Swings were exaggerated by low trading volumes, with many on Wall Street on vacation.

The S&P 500 rallied to an intraday high on Thursday before staging a retreat, after hitting its 70th record close of the year Wednesday. Meanwhile, both the energy and real estate sectors of the index saw their best year’s ever.

The index recorded a new all-time high every month this year, making 2021 among its best years ever, according to data published by LPL Research. The only other year it did so was in 2014.

“The huge end of year rally in 2020 was the first clue,” Ryan Detrick, LPL Financial chief market strategist, in a note.

Insigneo Financial Group CIO Ahmed Riesgo told Yahoo Finance Live that it was actually strong returns by only some companies that contributed to the index’s gains.

“Did the market have a great year in 2021? Most people would say absolutely,” he asserted, though adding it is more accurate to say that a few stocks have done “phenomenally” well, while the vast majority have been in the red.

“I think what you’re going to get next year is that internal rotation where these few stocks that performed very well in 2021 are going to under perform, perhaps drag the market down a bit, while the vast majority of stocks will shoot up,” Riesgo said. “All in all, taken together, this points to around mid- to single-digit returns for the [S&P 500] next year.”

Inflation is expected to be a focal point among investors in the new year. Rising prices have nudged the Fed into a hawkish pivot from its earlier predictions of “transitory inflation.” Now, the central bank is planning a quicker unwinding back of its pandemic-era monetary policies, and has boosted its forecasts for the pace of potential rate hikes.

Here’s how markets rounded out the year:

If history repeats itself, 2022 may be another strong year for equities.

Truist Advisory Services co-chief investment officer Keith Lerner pointed out that since 1950, when the S&P 500 had a total return of at least 25% in a year, stocks typically advanced in the following year. Across that 71-year period, stocks rose about 82% of the time — or on 14 out of 17 occasions, to be exact.

The two of the three years stocks failed to rise after 25%+ in annual gains were 1981 and 1990, both of which were periods marked by recessions, Lerner indicated. Although he doesn’t expect one in 2022, the investment chief did predict gains were likely to be more modest in the new year after a stellar 2021.

“I think that 2022 is going to be a good year that tends to follow a great year,” he said. “We certainly have a high wall of worry that we’re going to have to scale,”

The markets will have to weather rising inflation, determine the Federal Reserve’s pace on raising interest rates, and mull President Joe Biden’s second year in office — a period known as the “sophomore slump,” since the second year of a president’s term historically tends to be as much as 40% more volatile than the other three years, according to Stovall.

12:57 p.m ET: Casinos, housing among sectors to watch in the new year

“MGM is a long-term holding of ours and we’ve been adding to it on the weakness because of Omicron,” Gerber said. “We absolutely believe this is the endgame for [COVID-19] with this winter being sort of one of the tougher winters again, but as each winter rolls on, this will become much more normal and much less disruptive.”

Gerber also predicted that home builders, citing Lennar (LEN) as an example, will continue to benefit from outsized demand for housing despite some recent supply chain issues.

“I think over the next decade, Tesla will be the most consequential company in the history of business,” Gerber said. “I think in 12 months, we’re going to see amazing breakthroughs in AI and technology, and what Elon has done yet, we don’t know — you want to own stock in this future.”

PayPal Holdings, Inc. (PYPL) is on pace for its biggest annual decline since it was spun off by Ebay in 2015. The company’s shares have fallen 19% this year, making it the worst performer in the S&P 100, according to Bloomberg data.

PayPal shares have fallen around 30% since the company began exploring a deal to acquire Pinterest. However, the company walked back on its plan to buy the social media platform, stating in October that it was no longer pursuing the acquisition.

Buy-now, pay-later platforms have also placed pressure on PayPal and its peers in the payments sector during the second half of 2021 amid concerns over competition.

Airline stocks recouped some of this week’s losses in intraday trading but remain under pressure as flight cancellations and delays persist.

As of early Friday, over 1,100 U.S. flights, both within the country and entering or departing it, were cancelled, worsening an already ugly week for holiday air travel disrupted by a sharp increase in COVID-19 infections among pilots and crew members.

“It’s a controlled meltdown, put it that way,” Boyd Group International president Mike Boyd told Yahoo Finance earlier this week. Airlines “know where they’re going to be short pretty much ahead of time, and then they have to adjust for it.”

Meanwhile, Delta updated its policies for workers who get infected with COVID-19 to shorten the isolation period, in accordance with new guidance from the CDC that halves the recommended quarantine time from 10 to five days.

Here were the main moves by the major averages at today’s open:

7:00 a.m ET: Contracts on the S&P, Dow, and Nasdaq dip ahead of final trading session

Here’s how futures fared ahead of the year’s last market open:

Here’s how contracts on the major indexes fared ahead of 2021’s final trading day: