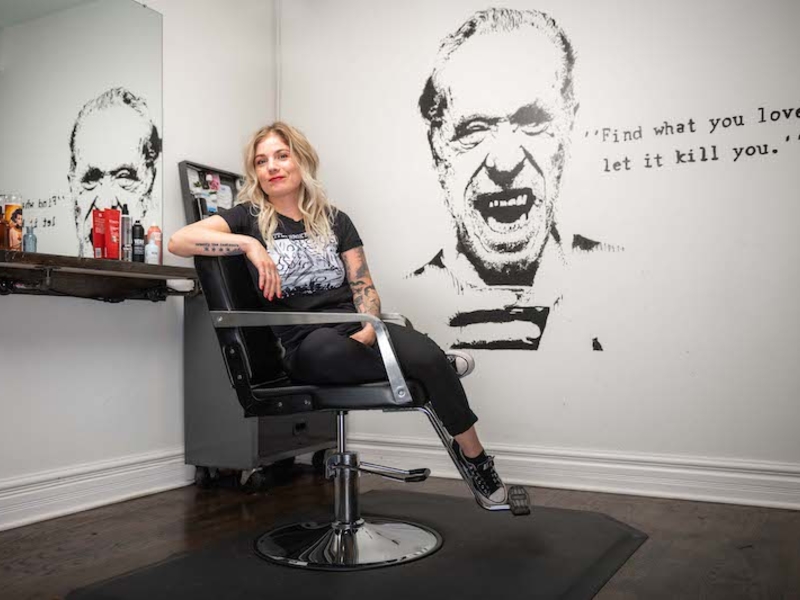 As a result, Alzate isn’t sure of when to hire a new employee or invest in a new machine to increase production capacity. After a year of posting on TikTok, she knows that every 10,000 views she gets on a video can drive about one purchase. The last video she posted on TikTok that went viral garnered 260,000 views and drove more than 200 orders.

Those swells in business are nearly impossible for Alzate and her partner to handle on their own, but the inconsistency holds her back from expanding. Unico Threads did $14,000 in sales in July. In June, however, it brought in only $300.

Business owners must strike a balance on social media, says Tim Calkins, clinical professor of marketing at Northwestern University’s Kellogg School of Management. They must be thoughtful managing the demand, while working to maintain lasting relationships with the new customers.

“For a business owner, in a way, it can turn into a huge problem,” he says. “You bring in a lot of people, you disappoint them, and then everybody leaves. When it’s all done, all you have are the costs you incurred to try to serve this wave of people.”

Chinese tech company ByteDance launched TikTok in 2016. In the U.S., its popularity spread among Gen Z users first. The pandemic fueled rapid adoption among all age groups, as people stuck at home and starved for entertainment downloaded the app in droves.

After losing revenue during pandemic closures in 2020, many small businesses turned to TikTok to find new customers. Some deem it vital to their marketing strategies: There are more than 100 million monthly active users in the U.S., according to TikTok, and they are hyperengaged.

“Brands, whether it’s a small brand or a large (consumer packaged goods brand), they cannot ignore the user database that is continuing to grow both in size and age of users,” says Brian Camen, director of digital, social and community for Ferrara Candy.

The Chicago-based candy maker has seven brands on TikTok, including Sweetarts, Laffy Taffy and Nerds. One post from Ferrara’s Trolli brand got 4.2 million views.

Camen declined to disclose how TikTok videos correlate to sales but said Ferrara considers its TikTok accounts a success. The sales correlation is more evident in smaller companies without large marketing budgets.

Unlike with traditional television, radio or print advertising, or even other social media channels, there’s no telling how large an audience any TikTok video will reach. Some of the videos of Chicago-area restaurants that Michael Loumeau has posted on his popular account Best Date Food garnered more than 1 million views and created lines for days at some of the featured locales. But Loumeau says he warns restaurants that there’s no guarantee a video will drive sales.

“Just because one video has a million views, doesn’t mean another will,” he says.

TikTok says it provides resources for small businesses looking to launch accounts. Its virtual Small Biz Block Party series teaches owners how to maximize reach on the app and introduces them to analytics TikTok provides. A recent event hosted Loumeau and other Chicago businesses, like JoJo’s Shake Bar, who shared their own tips.

TikTok’s algorithm sets it apart from other social media apps, as does its layout. The algorithm learns what users like to watch over time and feeds videos into their “For You” page. It levels the playing field for small businesses on the app, since their discoverability is not tied to the number of followers.

Krepel plans to extend operating hours, opening the salon at 8 a.m. instead of 12 p.m. The staff size has doubled, and Krepel expects revenue this year to be double what it was in 2020. The results are a dream for a small-business owner, and Krepel has seen the good it can do. But it has brought challenges. “It’s a lot of change really fast, and it’s also really scary,” she says.

Little Broken Things has instituted cancellation policies and focused on customer education, reiterating the costs and time involved in achieving a trendy vivid hair color. Krepel must make sure her stylists aren’t working themselves to exhaustion in the hopes of capturing every potential client TikTok sends their way.

“At first you’re like, ‘I want everyone to come in. I don’t want to miss a customer,’ ” Krepel says. “For just your own mental health, you can’t be doing that. It’s crazy.”

Krepel plans to step away from her stylist duties soon to focus entirely on managing the business through the growth. She still wonders how many of the new customers are here to stay. That’s a valid question for business owners to assess, says Calkins.

“TikTok comes and TikTok goes,” he says. “And very quickly all of that excitement fades away.”